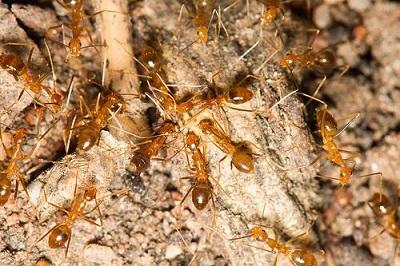 The ninth annual yellow crazy ant (Anoplolepis gracilipes) survey was conducted in November 2018 in the Vallée de Mai by the research team. The results indicate that this highly invasive ant has now spread across the entire reserve.

Yellow crazy ants were first documented in the Vallée de Mai in 2009. Annual surveys have been conducted since then to monitor the spread and distribution of the invasive ant over time. The survey uses pitfall traps at 50 points across the reserve, which are left for 24 hours and collected the following day. All ants in the traps are then sorted, identified and counted. The distribution of yellow crazy ants was relatively stable after its detection and covered <50% of the site until 2016, when there was a marked increase. Survey results from November 2018 show that the ants now cover 100% of the Vallée de Mai as well as the highest average abundance ever recorded at each survey point.

Research on the yellow crazy ants published in 2014, as well as experience from other islands, suggests that, unless the numbers of yellow crazy ants can be reduced, we can expect major impacts on the biodiversity of the forest, particularly on arboreal molluscs and geckos. It is likely that they will also affect ground-dwelling fauna, including caecilians, skinks and arthropods. It could be a crisis situation for the Vallée de Mai, making further ant control and research into their impacts urgent priorities for SIF. Indeed, declines in the slug and snail populations have already been noted anecdotally and are in the process of being confirmed.

So far, due to earlier expansion in their distribution revealed by the annual monitoring SIF has trialled methods to control the yellow crazy ants in the Vallée de Mai. Through the EU-funded Inva’ziles project, which was sought primarily as a response due to the increasing yellow crazy ant distribution, ant-specific bait stations using boric acid solution were trialled from March to September 2018. The trials did not show an immediate impact on yellow crazy ant numbers but indicated a subtler and potentially long-term impact of the bait stations, which is in line with what has been found elsewhere. The boric acid solution is known to be slow-acting so the bait stations are being deployed for long-term control of yellow crazy ants across the Vallée de Mai in an attempt to curb and ultimately reverse the species’ spread. Alongside this, the research team is monitoring abundance of other native and endemic species to document the impacts of this highly invasive ant.

The yellow crazy ant is listed as one of the top 100 worst invasive species by the IUCN and the Global Invasive Species Database. They can form super colonies (inter-connected ‘united’ colonies of multiple nests with multiple queens and workers which do not attack one another) and are aggressive to and competitive with other ants and insects, which enables them to out‐compete and displace other species and dominate food resources. The ants also spray formic acid which can subdue even large prey when many ants are attacking. These traits cause yellow crazy ants to have substantial impacts on the ecosystems into which they are introduced and it was the species that triggered the concept of ‘invasional meltdown’, following their catastrophic impacts after being introduced to Christmas Island.  The yellow crazy ant is present on a number of islands in Seychelles, including Praslin, but until recently it did not occur throughout the endemic palm forest.

SIF has substantially increased efforts on yellow crazy ant control since the survey results but is also actively trying to secure funding to conduct further control and management trials as well as doing additional research into impacts of this invasive ant. It is hoped that any impacts will be possible to mitigate with continued and increased control efforts and that we are not too late to act. Any interested parties for funding or research assistance should please contact SIF as soon as possible – we would welcome any expertise, support or advice on this potential emerging crisis.